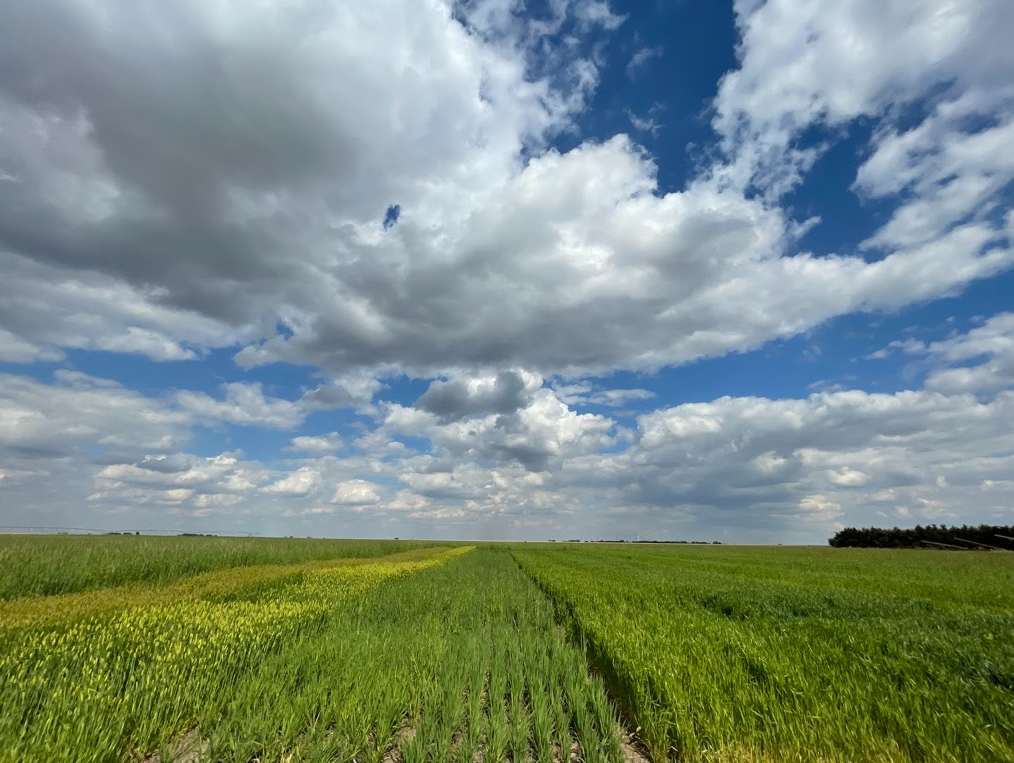 The biggest limiting factor for optimum crop growth in the heavy claypan soils that cover most of southeastern Kansas is something you can’t buy: soil oxygen.  Soil oxygen is absolutely necessary for roots to grow, and a lack of soil oxygen will result in a shallow rooted crop that will be very susceptible to drought, wilting in even a few days without rainfall. Soil oxygen is maximized when the soil is full of pore space. This pore space is also what allows rainfall to infiltrate into the soil. A soil that lacks pore space will have poor infiltration of rainfall, high levels of runoff leading to runoff and ponding, poor root development, and loss of nitrogen fertility into the atmosphere through denitrification. This is why we believe a lack of rainfall or a lack of fertilizer is causing our poor yields; it is actually a lack of rainfall infiltration, a lack of the soil to retain nitrogen, and a poor root system that is unable to extract either sufficient fertility or moisture.

Pore space is created by the formation of soil into little spherical structures called aggregates. Aggregates can be formed by a couple of processes. Aggregates can be formed physically through tillage, through freezing and thawing, and wetting and drying but these aggregates are not stable and break down over time. Stable aggregates, on the other hand, are formed only through the action of soil microbes, particularly fungi. These microbes create biological glues that bind the soil aggregates together.

Since pore space is so critical to crop yields, practices that enhance pore space will usually result in higher yields. This is why we often get a yield response to tillage, because there is a temporary increase in pore space when the soil is loosened. But this yield increase comes at a cost. Tillage causes an explosion in the population of microbes that eat the microbial glues, so tillage results in a long-term loss of pore space. Over time, a tilled soil will have a gradual loss of pore space and will require tillage to recreate short term pore space more and more frequently to maintain yields.

A no-till soil on the other hand, will not receive the loosening from tillage, but also will not have the breakdown of microbial glues and will have an increase in pore space over time. This is why, after a field is converted to no-till, yields often lag behind that of tilled fields. This observation is why many farmers give up on no-till after a year or two, saying “no-till just doesn’t work around here”.  But because the microbial glues and thus the pore space they create build up over time, the yield of the no-till fields will gradually increase and will eventually exceed that of the tilled field. Too many farmers give up before they hit this stage. But what if there was a way to greatly shorten this period, and get more pore space right away? There is, and it is really simple: raise more soil microbes.

How do you get more soil microbes?

Increasing your soil microbial population is not complicated. You simply create a favorable habitat and feed them. Microbes require a habitat that is moist, dark, and a stable temperature; the best way to create these conditions is to have the ground covered in a mulch. Microbes can be fed by the decay of crop residue, but far more effective at feeding microbes are root exudates. As much as 25% of the sugar a plant produces in photosynthesis gets leaked out of the root system to feed microbes in the area immediately surrounding the root system. The problem in the common corn-soybean rotation of the area is that these soil-building microbes only get fed about 3 or 4 months out of the year. This is why soils often get so hard in a corn-bean rotation.

Cover cropping can dramatically improve microbial populations by both creating a mulch and by providing root exudates. Pore space will increase approximately seven times as fast in a combination of no-till and cover cropping as it will in no-till alone. This is the magic of cover cropping.

A 200 bushel crop of corn requires about 24 inches of soil moisture, which is far less than what we receive annually. But if that rainfall doesn’t enter the soil, and if the roots don’t grow deep enough to extract more than a few days of moisture, plants will always be living “hand to mouth” , dependent on frequent rains during the growing season. We do not lack rainfall, but we do often lack moisture for our crops. Creating abundant pore space, however, will improve the infiltration of rainfall and deepen the root zone, so each rainfall will contribute more moisture to the soil profile, and the crop will be able to last longer between rains.  This abundant pore space can be accomplished by a combination of no-till and cover crops.