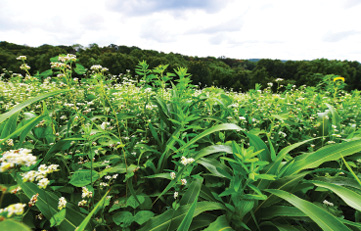 The principles of soil health not only are true for cropland and rangeland, but also have positive benefits for wildlife. In order to build wildlife health and populations, we first have to build the soil in order to grow better and more nutritious forages. Wildlife in general and deer specifically thrive on diversity and will do an amazing job of balancing their diets when given the opportunity to browse on a diverse assortment of legumes, grasses and forbs.  Unfortunately, the majority of wildlife foodplots consist of monoculture stands of a single cereal species or of a clover. Furthermore, most foodlots have traditionally relied on disking, fertilizing and herbicide use, like much of modern industrial agriculture. But just like the soil health movement that we see in regenerative agriculture, a similar movement is happening in the foodplot world as well.

Grant Woods has been a leader in this regenerative wildlife movement on his Ozark Mountain rocky “proving grounds” and he has shown that soil can be built by applying the principles of soil health.  By keeping the soil covered, keeping living roots in the soil, maximizing diversity, and minimizing disturbance, Grant has transformed degraded, rocky soils with almost no organic matter to rich, productive soils with 5-6% organic matter levels. In his own words, here is how he did this, “Because I did not have easy access to synthetic fertilizer or compost, I drilled diverse seed blends. When I say “diverse” I don’t mean three types of clover and wheat. I mean eight to 20 different species including grasses like small grains, brassicas, legumes, and broad-leaved plants. I’ve learned from the work of other regenerative farmers that a diverse blend of plant species is a big part of releasing the soil’s potential!  This is why I have called the process the “Release” system. While researching ways to improve soil health in order to provide more and better-quality forage for wildlife, the Green Cover name kept showing up and I started spending time on their website. Their blogs, webinars, and other resources have been a great source of free in[1]formation for myself and many others. I also appreciated their purpose statement: To help people regenerate God’s creation for future generations. This rang a bell with me as our purpose or mission statement is: To help others enjoy creation and know the Creator. Wow—it’s rare for two totally separate groups that have never met to have such a similar mission. Knowing this, I was eager to meet Keith and Brian Berns and the Green Cover team. After visiting with them, I knew their mission statement truly reflected their heart and goals. It was obvious to both of us that our boots on the ground approach to improving forage and grain productivity as well as soil health were very similar.”

In 2021 Green Cover and Grant Woods and his Growing Deer team decided to partner to assist wildlife habitat managers grow bigger deer while improving their soils.  We are working together to share information, techniques, and high-quality seed blends that will improve the soil’s productivity while attracting deer and providing a greater quantity of quality nutrition to wildlife.

The “Release” process is working for people all across the country. A great example comes from east Texas where Grant Woods helped create a habitat and hunting improvement plan for George’s property. One particular “problem” field was filled with pine trees and very poor sugar-sand soil.  Food plot establishment on this field had been attempted in previous years but nothing ever took and there had been no significant forage produced for the deer. When Grant was evaluating the property, he told George “The Release Process is the perfect solution to increase the quality and quantity of forage produced and give you better habitat and hunting!” 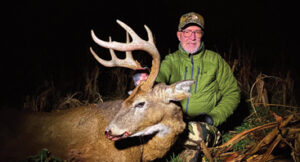 George was skeptical at first but eventually trusted Grant’s opinions and experience and he took his first big step and purchased a no-till drill. George remembers, “Well, like I said, I was not a believer in this system. I did not want to get rid of my disk or my bush hog or my drag. I wanted to broadcast seed like I had always done, but this Release process is amazing, really and truly. The no-till drill has allowed me to do it much quicker.” The Release Process has saved George so much time as he has one trip across the plots instead of 3 or 4. It has reduced his seed costs because he uses 50% less seed when drilling and precisely placing seeds instead of broadcasting and “feeding part of it to the turkeys, squirrels, crows, or other critters”. 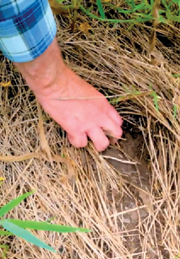 After two planting and one season, the soil is covered, turning a darker color from the carbon, and supporting a diversity of both plant and microbial life. Photo by: Grant Woods 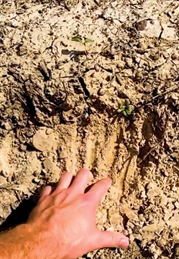 Depleted and nearly dead Texas soil that George started with in many of his food plots.

George’s journey started by planting a diverse fall blend of cereal rye, small grains, and some annual clovers. This blend grew well through the fall, winter and early spring and when soil temperatures were warm enough (60 degrees), he no-till drilled the Summer Release right into that crop. By following the release process and applying the principles of soil health, George has witnessed tremendous improvements in his plots throughout the summer. His fall crop covered, protected and nurtured both the soil and the biology through the winter and his Summer Release crop did the same through the hot Texas summer.  Better soil has led to increased infiltration and better water holding capacity in the sandy soils, which is critical for success when rainfall is sporadic and unpredictable. Herbicide treatments have also been eliminated as the constant covering of the soil and growing crops have also helped suppress weeds along with providing high quality forage for the wildlife. George notes, “I see fawns bedding down in the forage, older bucks utilizing the plots and the turkeys absolutely love it” 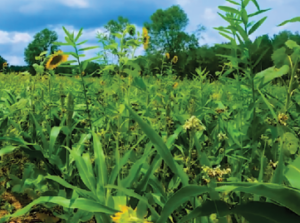 Sunn hemp, sunflowers, buckwheat, milo, and other species are thriving together in this Summer Release blend that George planted in May. This blend is not only healing and building his soil and feeding his soil life, but providing a great food source and habitat for his deer population as well. This East Texas property has never had such productive food plots!

George’s fields have both tremendous diversity as well as ground cover now due to the different crops that he has planted in the fall and spring. All the clovers, peas, cereals, and brassicas are working together to help create a biologically rich ecosystem. Grant comments “George has made tremendous progress in just one year – there are tons of food and coming on at different times of the year. It’s just awesome and it will continue to get better as the deer will not only be conditioned to eat in these plots but will learn to live here as well.” This is proving to me a very true statement as George has already seen more bucks at his property in the last year than he has ever seen in the past. He didn’t believe that Grant’s plan would work but after seeing how well his forage has done, he is a believer now. George sums it up well, “I’ve never had food plots like this. I have tremendous forage where before plots wouldn’t even grow. It’s been amazing. This Release program really does work and this is the very first time in 35 years that I have had a food plot that I can say I’m extremely proud of.”