Everything You Ever Needed To Know About Mycorrhizal Fungi 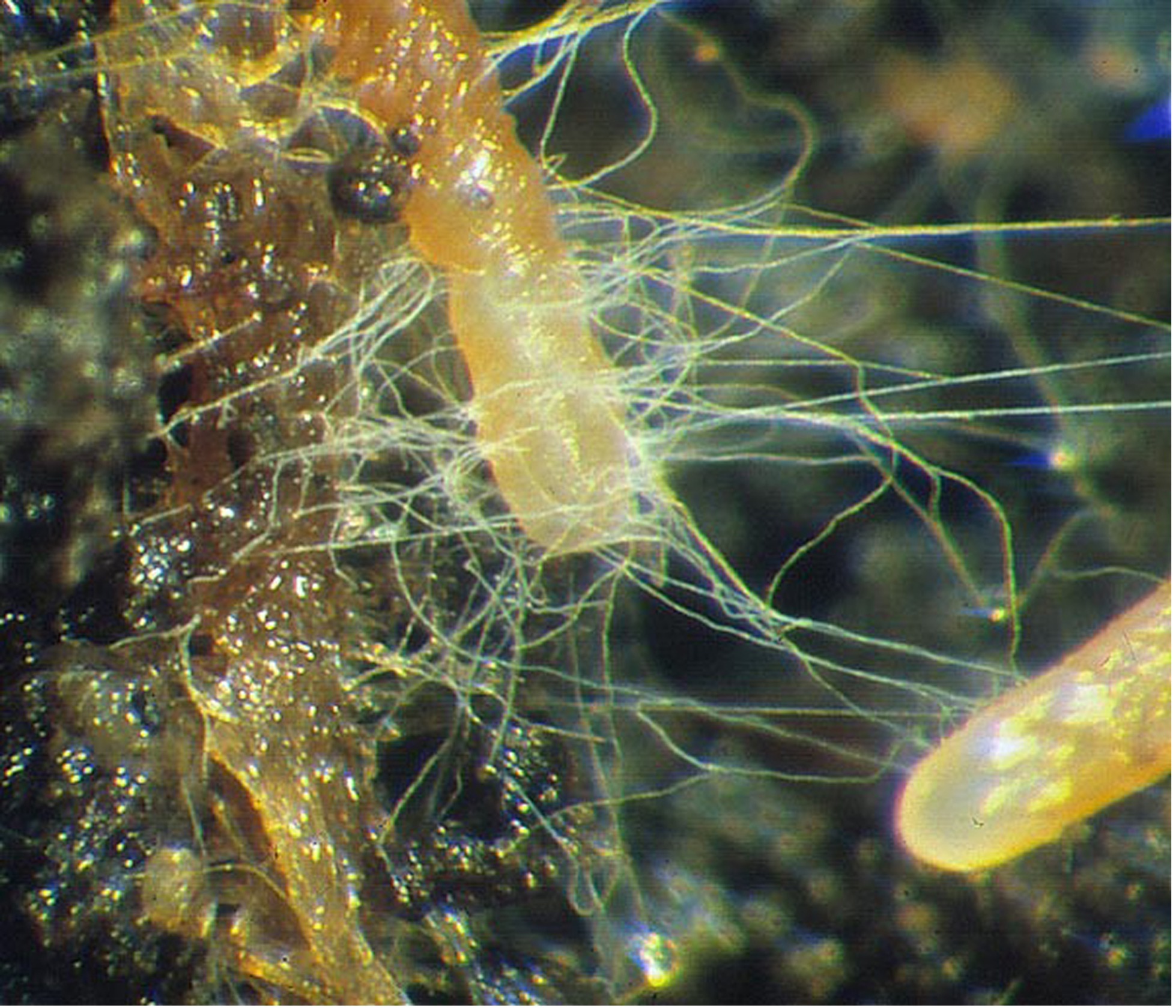 Mycorrhizal fungi (MF) are one of the most beneficial organisms on the planet. They are fungi that colonize plant roots, living partially inside and partially outside the roots, and act as extensions of the roots to aid the functioning of the roots. Whatever a root is supposed to do, a mycorrhizal colonized root can do better. Some of the benefits of mycorrhizal fungi include: 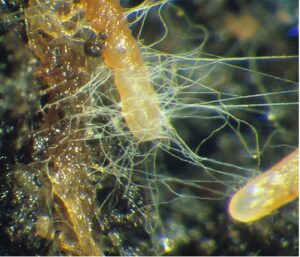 The fine white filaments shown here covering the yellow plant roots are the mycorrhizal hyphae. Note how much smaller in diameter they are than the roots.

Plants allocate a certain amount of energy to the root system. In the absence of MF, plants must build root hairs, which takes quite a bit of energy. Plants colonized with MF do not produce root hairs and instead use a much smaller amount of energy to give to the MF to perform the job of uptake of water and nutrients. The hyphae (root-like structure) of MF is about 1/16th the diameter of a root hair, and if you do the math it takes about 1/256th the energy investment per mm of length to build than a root hair. With this energy savings, plants colonized with MF tend to build much better root systems. 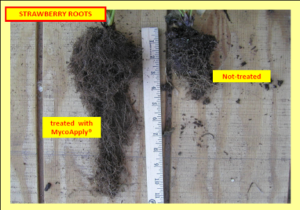 Obviously, one of the primary functions of a root system is water uptake, and a colonized root will do so much better than an uncolonized done. One reason for this is that the hyphae extend up to 18 inches past the root zone, while root hairs only extend a few millimeters. Another reason is that the narrow diameter of the hyphae means they can grow into crevices much too small for root hairs to reach.  Combine these two differences, and together they can buy another week or two of water from a soil during a dry spell before moisture stress kicks in. The table below shows research from the University of Wisconsin-River Falls, showing superior drought tolerance of treated corn. 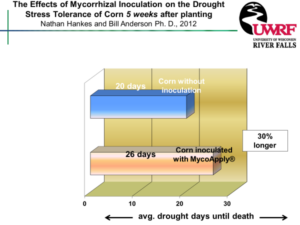 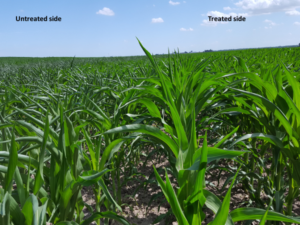 This field had MycoApply applied to the right, and not to the left. This is a sandy soil in North Central Kansas. 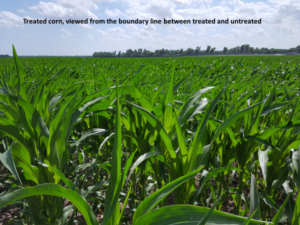 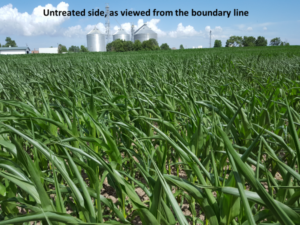 MF hyphae can grow much faster than roots, and thus enable seedlings to access water and fertility easier than uncolonized plants. This is particularly important for small seeded, slow establishing plants like most forage grasses and legumes, and perennial crops like fruit trees for which a faster start can mean fruit production a year earlier than it would occur otherwise. The data below illustrate how much faster a MF colonized stand of big bluestem can develop compared to a noncolonized one. 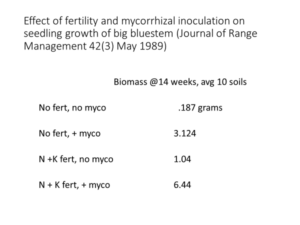 Reduction in root disease and nematodes

MF coat the roots with a protective layer of a fungal tissue called chitin (the same compound that makes up crab shells). Nematodes and disease organisms that attack plant roots lack the enzymes to penetrate this layer, thus MF confer a moderate level of protection against these pests. The photo below demonstrates this protective layer. 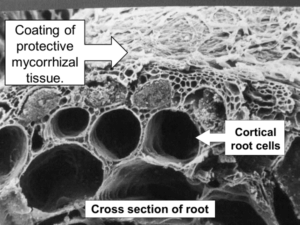 Along with increased water uptake, MF colonized plants also exhibit superior uptake of mineral nutrients. This difference is most pronounced for nutrients that do not move well within soils, such as phosphorus, iron, and zinc. Note the differences in the table below between colonized and non-colonized plants of corn in a University of Florida study.

The hyphae of MF have an exudate called glomalin, that is the most powerful and persistent soil aggregating agent found in nature. Glomalin is only produced by MF fungi. Soils growing MF colonized plants will usually exhibit a rapid improvement in soil structure and will appear a couple shades darker. 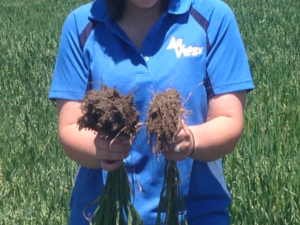 These two oat plants were pulled about three feet apart at the same time. The one to the left in the photo was treated with MF inoculant. Note the much darker soil, and how the soil is clinging to the root system better. This comes from the glomalin exuded by the mycorrhizal hyphae. 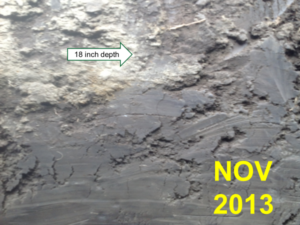 This photo was taken from a soil pit in a field of eastern gamagrass prior to inoculation with MF. 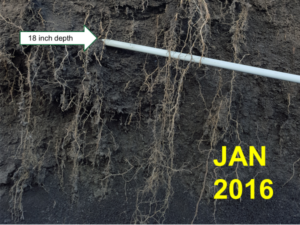 This photo was taken in the same soil pit 27 months after inoculation.

Reduction in compaction. The hyphae can exert a much higher pressure per square inch than roots to penetrate dense soil layers, and the finer diameter means it is also easier for the hyphae to penetrate these layers. Once a hardpan is penetrated by hyphae, the glomalin takes over, and creates a lubricated path for plant roots to follow.

Reduced weed growth. Many weed species, like kochia, pigweeds, smartweed, wild mustards, and lambsquarters, are not colonized and do not benefit from them. Inoculating the crop with MF makes the crop root much more competitive for water and nutrients than the weed roots. The study below, from North Dakota State University, showed a 54% reduction in weed biomass from inoculating a sunflower crop with MF. 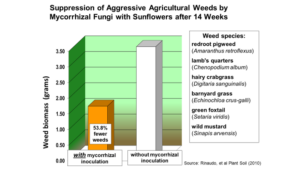 Overall improved soil biology. Most beneficial soil microbes live in the rhizosphere, the thin layer of soil surrounding the plant roots. The surface of the hyphae of MF can serve a very similar role in providing microbial habitat, and the surface area of the hyphae of a colonized plant may be a thousand times greater than that of the surface area of plant roots alone. Colonization with MF is a very important step in improving soil biology. 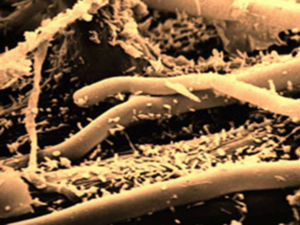 Photo showing mycorrhizal hyphae covered in beneficial bacteria. Colonization with MF can increase the potential habitat for rhizosphere microbes by as much a thousand-fold.

Don’t I already have this in my soil?

We used to. MF was once present over nearly all of the worlds land surface. But MF must have a live root as a host. Once we plowed soil and started growing annual crops and fallowing in between crops, these beneficial fungi died off.  You can find very small amounts in most historically cropped soils, and by using cover crops to maintain a live root at all times, these populations can be gradually built up over time, perhaps a period of five to ten years. Alternately, you can speed the process up by inoculating a crop with mycorrhizal spores and start enjoying the benefits almost immediately.  Note the graph below that shows how MF die off during long fallow periods. 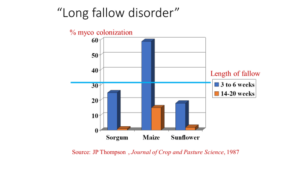 How much does it cost to apply?

For a full rate of MF inoculant, depending on formulation, expect to pay about $12 dollars an acre.  This rate is designed to provide 150,000 propagules (spores and root fragments containing mycorrhizal fungi) or more per acre.

Has this been researched?

What plants are hosts for mycorrhizal fungi?

Corn, sorghum, wheat and other small grains, and all other grass crops including forage grasses

Alfalfa, clovers, soybeans, and all other legumes (except lupine, which is non-mycorrhizal)

And hundreds of other crops. If you are unsure of a crops response to mycorrhizal inoculation, try to find a related plant on this list, or just call us and ask.

What plants do not respond to mycorrhizal fungi?

Some plants are non-mycorrhizal, and do not benefit from inoculation. These include the following:

Members of the amaranth (pigweed) family

Members of the Chenopod family, including weeds like lambsquarters, but also spinach, quinoa and sugar beets

Members of the Polygonacea family, like smartweed and buckwheat

The lack of mycorrhizal association is not necessarily a reason to exclude a plant from a cover crop mix; because most of these species have developed alternate nutrient uptake methods to compensate for this lack. Brassicas, for example, have developed very large root systems to take up nutrients. Buckwheat has developed root exudates that contain organic acids that can free minerals up from unavailable sources. These are valuable traits to include in a cover crop blend, but without at least one mycorrhizal host in a mix, the fungi can die off. A blend of buckwheat, sugar beets, turnips and radishes may be diverse and beneficial, but will not keep MF alive. One should be sure to include at least one (and preferably several) mycorrhizal hosts in a cover crop blend.

Under what conditions do I get the “best bang for my buck” spent on mycorrhizal inoculant?

Some crops also respond more than others.  Perennial crops like fruit trees or alfalfa respond very well economically to MF, because one inoculation lasts for years. New plantings of perennial grasses and legumes, particularly native warm-season grasses like big bluestem and eastern gamagrass, respond quite dramatically to MF.

How do I apply MF inoculant?

We can apply to cover crop seed mixtures that we sell, or we can sell you the powder to apply yourself to your own seed.  With crops seeded with a planter, such as corn, the powder can be blended into a small amount of water then added to liquid starter fertilizer.

Once I apply MF inoculant to my seed, how long can it survive before I have to get it in the ground?

Unlike Rhizobium bacteria, mycorrhizal spores are very durable. They can last as long as two years on seed without much loss of viability. They are not bothered by ultraviolet light, drying out, freezing, fertilizer contact, or normal storage temperatures.  They are killed above 140 degrees F.

I use a seed treatment fungicide, will that kill mycorrhizal fungi?

Not in normal use. The fungicides used for seed treatment are either nontoxic to mycorrhizal fungi, or stay adhered to the seed and do not follow the root out away from the seed where it can contact the mycorrhizal spores.  The graph below shows results of a fungicidal seed treatment study applied in conjunction with MF that shows that all treatments had over 30% colonization, the minimum level deemed necessary to optimize plant growth. 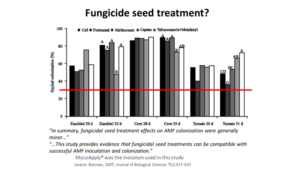 If I use a foliar fungicide, will that kill mycorrhizal fungi?

No. Foliar fungicides have a hard time translocating from the top of the leaf to the bottom of the leaf, let alone down to the roots. Nearly all foliar fungicides in common use on field crops are nontoxic to mycorrhizal fungi anyway.

How long do mycorrhizal fungi survive in the soil after I apply them?

Mycorrhizal fungi last as long as the host plant they are attached to remains alive and can live for a couple weeks or so after that plant matures or dies.  Usually, if a cover crop or double crop is planted immediately after the harvest of another crop, the fungi can be kept alive from one crop to the next.

How do I get this wondrous product?

Call us here at Green Cover Seed, and we will set you up!