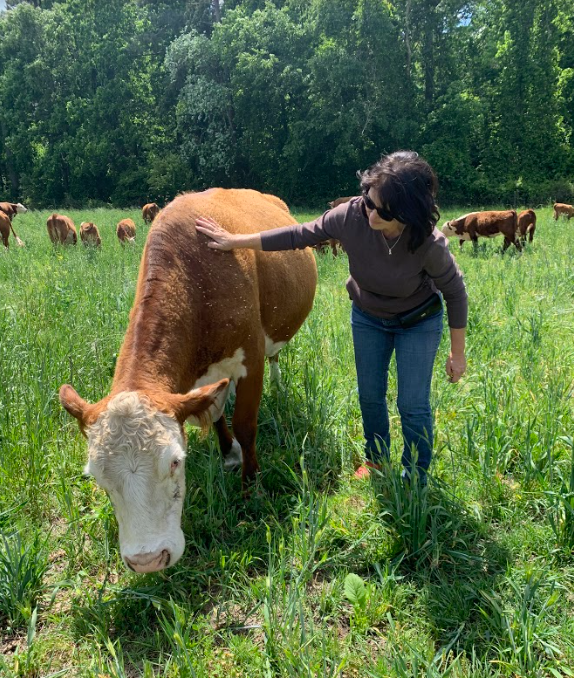 Integration of livestock back onto the land is an extremely important part of the soil health system, but is often the most overlooked or ignored principle. Grazing ruminant animals on our fields has benefits that we simply cannot mimic in other ways. Our deep, rich prairie soils were built as a result of large herds of animals grazing the landscape. Almost every acre had livestock integration until settlers came in and started to push out the wild bison herds in order to till the soil.

Prior to the availability of synthetic fertilizer, animal waste was the main fertilizer, and to this day, manure remains one of the most effective forms of organic carbon. Grazing is a powerful process because as the animal digests the grazed forage, the microbial community in their gut breaks down the plant material into nutrients. As the waste exits the animal via dung and urine, many microbes are deposited into the soil as well. By grazing animals, we can increase microbial diversity and feed the microbes that are already in our soil ecosystem.

Grazing is not as simple as opening the trailer and turning animals out. Fencing, water, and proper management are all part of diversifying an operation with animal incorporation. To maximize the profitability and soil health benefits of livestock, a higher stocking rate with faster moves are needed than what would typically be considered “normal” in a continuous grazing situation. This will not only help distribute manure more evenly over the entire property, but will allow forage to be managed and utilized more effectively. The goal is to take half and leave half of the forage biomass. By doing this, the soil will stay covered and the plants will have enough leaf area remaining to photosynthesize and regrow quickly. This rapid regrowth will also produce more liquid carbon root exudates for the soil and soil biology. This system of managed grazing will also allow for longer, more controlled rest periods for the forage, maximizing both yield and quality.

Many people associate animal impact on soils with compaction, but that does not have to be the case when done properly. Kansas State University has done numerous studies on the effects of livestock in cropping systems and the potential of compaction. What they have found is that in a system that uses tillage before incorporating livestock, the animals will make a mess with pugging and compacting because there is no soil structure to help hold them up.

Conversely, no-till systems with cover crops exhibit very few negative animal performance or soil quality issues because of the enhanced soil structure holding the animals up. The studies showed that in good soils, the compaction layer caused by livestock rarely reached past three inches, and that no-tilled soils had a slower compaction rate. In most soils, the decompaction of the annual freeze/thaw cycle will more than offset any compaction caused by grazing.

Owning animals can seem daunting to row crop farmers in some parts of the world. But the principle of integrating livestock does not mean that you must be the owner of the animals. Custom grazing another producer’s livestock is a viable option. Custom grazing non-owned cattle is a viable option. Just make sure that the person managing the cattle understands the principles that make grazing and livestock incorporation a blessing and not a bane!

Proper fencing and water systems are key to making the system work. The design and implementation of infrastructure may seem daunting, but there are many resources on the internet showing modifications that can be made to more easily add livestock to your operation. It also does not matter if the animals are cattle, sheep, goats, hogs, or chickens. The key is to get animals on the land to help build soil health!

Zach Louk is a Green Cover Sales Representative based out of Iola, KS, and also a farmer and rancher. A love for the soil and for animals drives him to work tirelessly to regenerate his small part of God’s creation, and to go the extra mile to help others do the same. Zach and his wife Danielle and their two small children are life-long residents of Iola, KS.