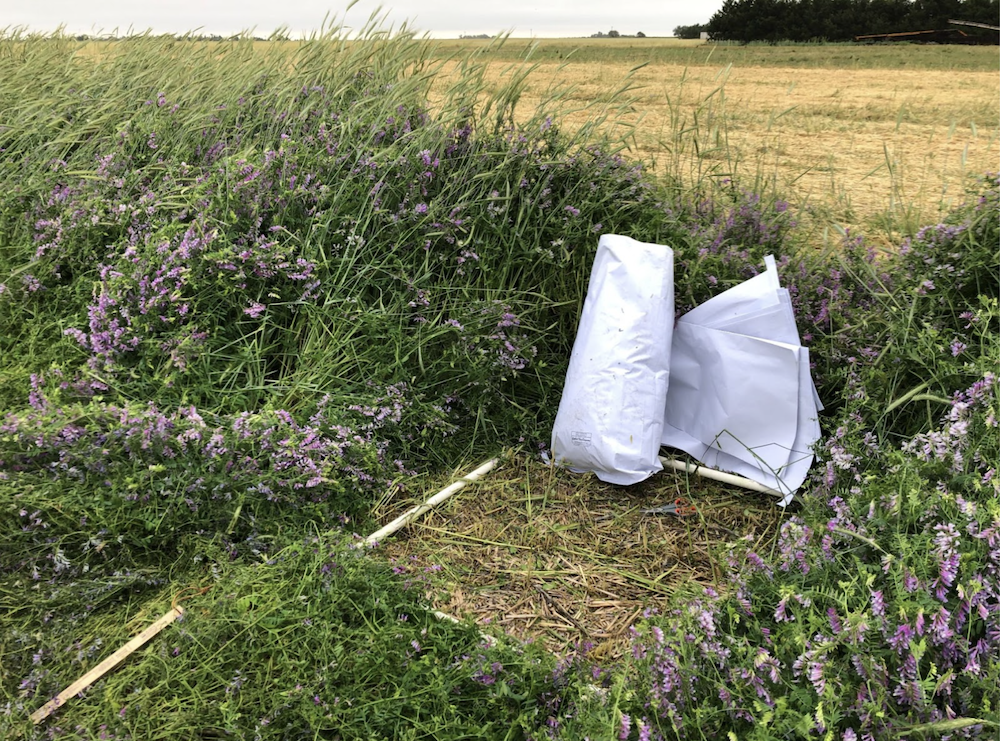 “How much biomass and how much nitrogen can I grow with a cover crop that is not planted until the first week of October?” This is a great question and one that is both asked often and very relevant to this time of the year. We wanted to quantifiably answer this question with our 2021 planted overwintering cover crop test plot.

The setup – In the spring of 2022, we began to measure biomass and nitrogen from cover crop growth on a weekly basis in our overwintering test plots. These plots were planted on October 6th, 2021 and a few late entries on October 26th. The timing was chosen to correspond with a reasonable date someone could plant a cover crop within a corn/soybean rotation.

The testing protocol – Starting in May, biomass samples were taken on a weekly basis (+/- 1 day) and submitted to Ward Labs. We built a 1 square yard PVC pipe frame and clipped all the cover crop growth within the square.  The biomass was recorded and sent to Ward Labs. The lab calculated the % dry matter upon receipt of samples. We used the P-421 Cover Crop C:N analysis, which looks at % DM, Total Carbon, Total Nitrogen, and Total Biomass (DM) per acre. The graphs below show selected plot entries that were collected and tested. 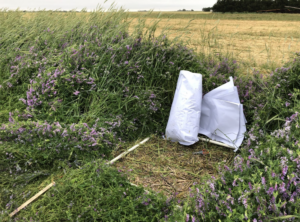 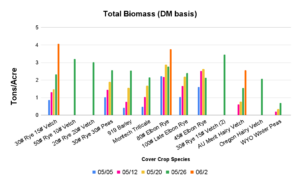 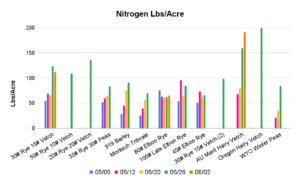 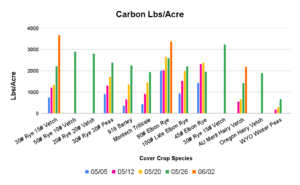 From these three graphs, one theme is consistent and unsurprising – more time equals more growth for the cover crop until it matures (which most of these did or came close to by the beginning of June). The total biomass graph and the total carbon graph are basically identical, at least in their trend. You can also see from comparing monoculture rye, monoculture hairy vetch, and the vetch/rye mixes that the rye was earlier maturing than the vetch, and combining the two yielded the most biomass.

Anecdotally, the mixes appeared to be dominated by rye early on but then as May progressed, the vetch took off and swallowed up the rye, pulling it down as it climbed, reaching for sunlight. If these mixes were to be roller crimped, a person would need to perhaps compromise between the ideal kill stage of the rye (anthesis/pollen drop) and the ideal kill stage of the vetch (about 90% bloomed).

The nitrogen graph proves that significant nitrogen can be produced ahead of a corn crop depending on when it will be terminated. For someone wanting to terminate their cover crop early and plant corn around May 1st, the vetch is likely not worth the expense (we didn’t even collect samples of the vetch on May 5th because there was not enough there to justify the time). However, if allowed to grow until the last week of May, vetch can become a very economical solution to nitrogen needs. Notice on the AU Merit entry how the vetch doubled in nitrogen contribution from May 20th to May 26th.

Conclusion – Cover crops do a great job of increasing sunlight capture, protecting against erosion, and suppressing early weeds. If you want additional benefits of lasting residue throughout the growing season and nitrogen fixation, the cover crop needs time. Ideally this means planting early enough in the fall for good development before winter, as well as allowing the cover crop to grow long enough into the spring to reach it’s potential. For more information of what this can look like, check out our Ultimate Weed & Feed video on YouTube.

Want to get in contact with one of our valued Sales Representatives to discuss your options for overwintering? Head over to our Contact page to get started!