How to Fix Clay Soil 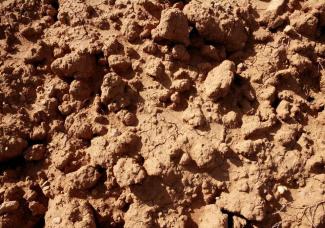 Dealing with clay soil can be one of the more aggravating experiences in all of agriculture. Agriculturalists from the home gardeners to farmers with thousands of acres all express frustration at this hard-to-work-with growing medium. Sticky when wet and rock hard when dry, a soil high in clay can make even the most patient person lose their religion.

Yet, despite its drawbacks, clay does have its redeeming qualities. Of all the primary soil particles (sand, silt, and clay) clay is the only one with any appreciable ability to hold water or mineral nutrients.  Therefore, on a per acre basis, clay is the most moisture laden and nutrient laden of all soil types. That sounds wonderful! Water and nutrients, isn’t that what soil is all about? So what is the problem with clay?

The problem is two-fold. First of all, no matter how much water or nutrients there are in a soil, plants must be able to get them out of the soil, and they do so with roots. Roots need a certain level of oxygen to grow, and the tight, small pore spaces found in clay do not lend themselves to allowing air to move into the soil from the atmosphere. This results in plants growing on clay soils having very shallow root systems, this is not because the soils are mechanically hard, it is because of poor oxygen penetration. Secondly, this lack of pore space also makes it difficult for rainfall to infiltrate into soil; small pore spaces are even harder for water to penetrate than they are air.  Thus, clay soils, despite having a very high ability to hold water, are often very likely to suffer drought stress because #1:  a high percentage of the rainfall that falls on them tends to run off instead of soak in, and #2: plants growing on them have very shallow roots, limiting plant access to both water and nutrients.

How do we make clay soils more productive? Here are some actions we can take to remedy the problems posed by clay soil:

Soil aggregation is the forming of thousands of clay particles combined with sand and silt into relatively large round balls of soil. The optimum size of an aggregate is about 3/8ths of an inch in diameter, which seems small but is quite large relative to the size of a clay particle, which is 4-5 microns in diameter, and a micron is 1/25,400th of an inch. When a soil is well aggregated, there will be rather large pore spaces between these aggregates for both air and water to move around freely and enter into the soil from the surface.  Aggregation in a soil is promoted by high calcium content, high organic matter content, earthworm activity, biological glues formed by microbes that feed on root exudates (sugar rich secretions that ooze out of growing plant roots), and a little known compound called glomalin which is produced only by mycorrhizal fungi (see article) and is the most powerful soil aggregating agent known to science. Soil aggregation is destroyed by tillage and fallowing, and by high soil temperatures.

One of the major benefits of having good soil cover is that it absorbs the impact of raindrops, which prevents the sealing off of the soil surface during rainfall. Although it is somewhat counter-intuitive, a soil with good levels of cover will experience much better rainfall infiltration rates than a tilled soil. A soil with good levels of cover will also have a lower soil temperature in the summer than an uncovered soil, and will have lower rates of evaporation of soil moisture than a bare soil. All these contribute to a better ability to capture and supply soil moisture to plants.

Encourage the activity of earthworms and dung beetles.

These animals create large macropores into the soil profile which greatly promote infiltration of rainfall and the aeration of soil. Earthworm activity is promoted by including legume cover crops in the rotation (no, soybeans for grain don’t count), adequate levels of calcium and a neutral soil PH, and high amounts of surface residue. Dung beetles are promoted by summer grazing of cover crops on cropland and the avoidance of pesticides that kill dung beetles, primarily ivermectin.

Clay soils have tremendous potential for productivity if they are well-aggregated, populated by earthworms and dung beetles, and left covered with cover crops. Tillage and fallow of clay soils may initially appear to improve the productivity of crops growing in clay soils, but in the long run reduce soil organic matter and aggregation and begin a downward spiral of reduced pore space and progressively lower productivity over time.